Japan has, for millennia, excelled at the pursuit of umami. This most basic taste profile comes from a variety of sources, from meat to mushrooms to tomatoes to seaweed. It delivers the recipient to places that the other four tastes cannot even begin to imagine. A higher plane of sensory existence. The pursuit was one well worth engaging and it resulted in many good things both discovered and created: kombu seaweed, bonita tuna flakes, shiitake mushrooms, fish sauce, nutritional yeast, soy sauce and miso paste, among many others. 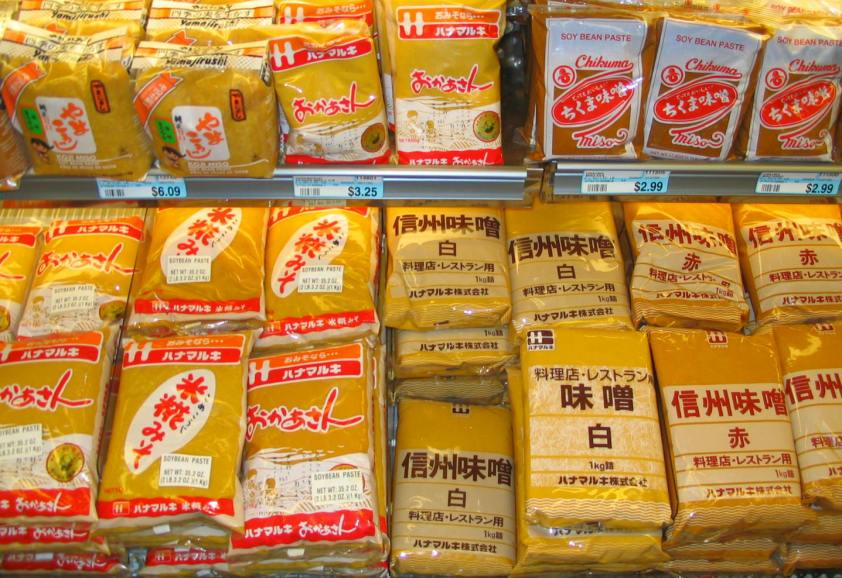 Miso is itself a fermented product, the result of soybeans being overtaken by the filamentous fungus called koji or Aspergillus oryzae. So, it only seems natural that it should be used to ferment other edible items, imbuing those tertiary characters with the enviable umami profile. Of course, the Japanese have given us this gift as well. Called miso-zuke (literally miso pickle), the embedding of vegetables in a miso mixture is a common practice among traditional Japanese cooks.

From “The Book of Miso”, a more traditional misozuke using cucumber

Often, the process is considerably slower than the experiment I, myself, undertook. Where they might use a whole uncut cucumber and let it mingle in the miso for several weeks, I sliced the cucumber (one large English cucumber) and let it hang out for less than a week. Cutting the cuke into slices allows for total access of its precious insides for the miso to do its work.

The first thing to do, before starting in on the miso, is to salt the slices. This works the osmosis magic on the vegetable, displacing the water from the cucumber’s cells. Just salting starts the process but to be efficient about it, one must use gravity and monkey brain ingenuity. Place the cucumber slices in a colander over a large bowl, then place a smaller bowl inside the colander to press down on the cukes. Now find some heavy things (such as shotput balls, one thousand marbles, or all of mother’s fine jewelry) and put them in the bowl. Now, wait. 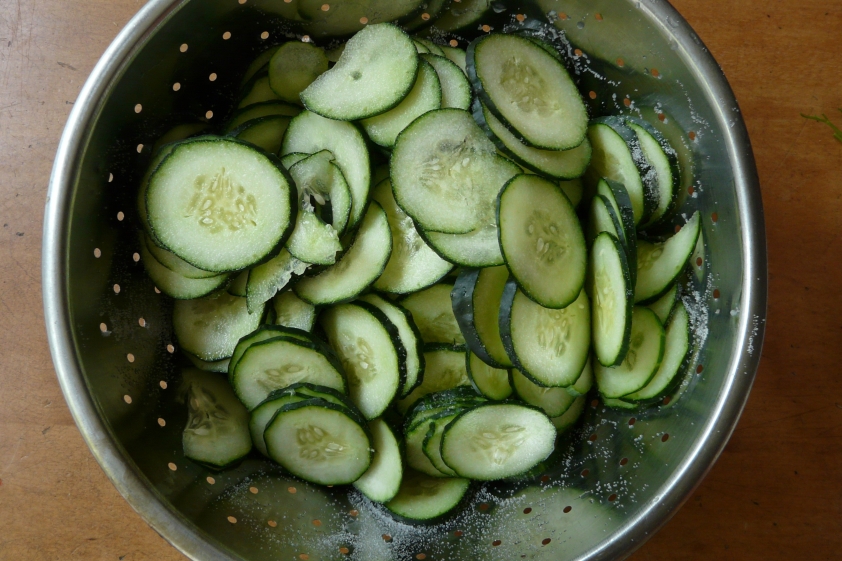 Meanwhile, the miso mixture. I was less scientific this time around about the ingredients (I’ve atoned for my sins and am seeking help). It was essentially this (which I then doubled for two bags):

If I were to do this again today, I would probably add some grated garlic and ginger, a little sugar and a piece of kombu. That said, the above mixture does result in dynamite pickles.

Another regret, from which I and all readers should learn, is that I didn’t let the cucumbers salt press for long enough. After letting them sit under weight for a couple hours, and seeing that a fair amount of liquid had collected in the bottom bowl, I took their slightly floppier forms out and slapped them in the bags. With the mixture and slices in the bags, I massaged them ever so vigorously to ensure that the miso touched all cucumber surfaces. Then, pulling out my dusty vacuum sealing machine, I sealed up the bags and marked them with the date. 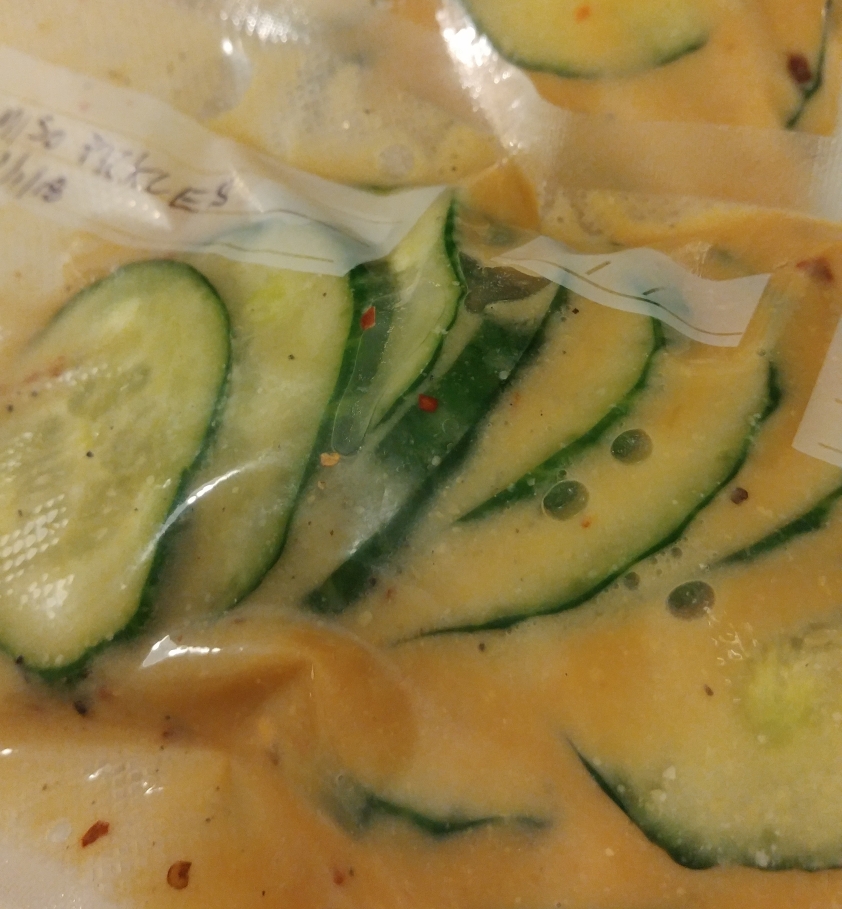 At this point, I tossed the two bags in the fridge and let myself forget about them a bit. Probably had a beer. Or a few.

During this time of waiting, the miso endears itself to the cucumber, needling its way into the cucumber’s life until cell by cell the cucumber becomes less individual and more co-dependent on the miso for support. Eventually, they marry their flavors, the cucumber forgetting who it was before miso came into its life.

Now, harkening back to my regret about the salt pressing, I noticed after a few days that the miso mixture in the bag was beginning to loosen up and become more liquidy and less non-Newtonian. This signaled to me that the process of osmosis was interrupted by a less-than-patient pickler. So, next time my pressing will be more completist. This could also further imbue the flavors into the cucumber as when the liquid is displaced from the cells, the miso can then rush in to fill the void. 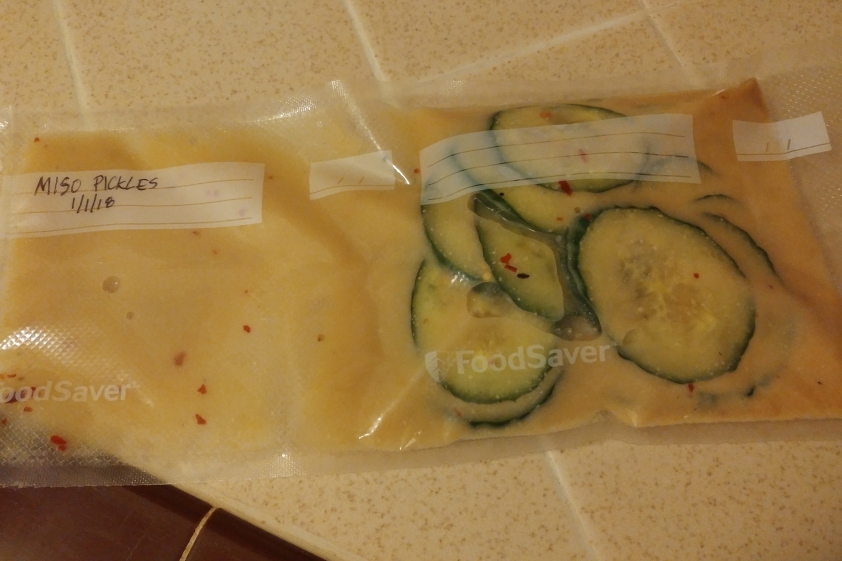 So, six days into the process I opened up one of the bags to see what changes had occurred and what tastes lay in store.

Visually, the slices took on an unsurprising pale green, darkened flesh and relatively unchanged skin. The texture was still quite refreshingly crunchy. It tasted a little tart, with a blast of that coveted umami; creamy in a mushroomy way. There still remains that essential cucumber character, its flavor enhanced with the layers of miso complexity. These would be fabulous in a salad, but would just as easily go great eaten by themselves, greedily while still standing in the kitchen in the middle of the night. 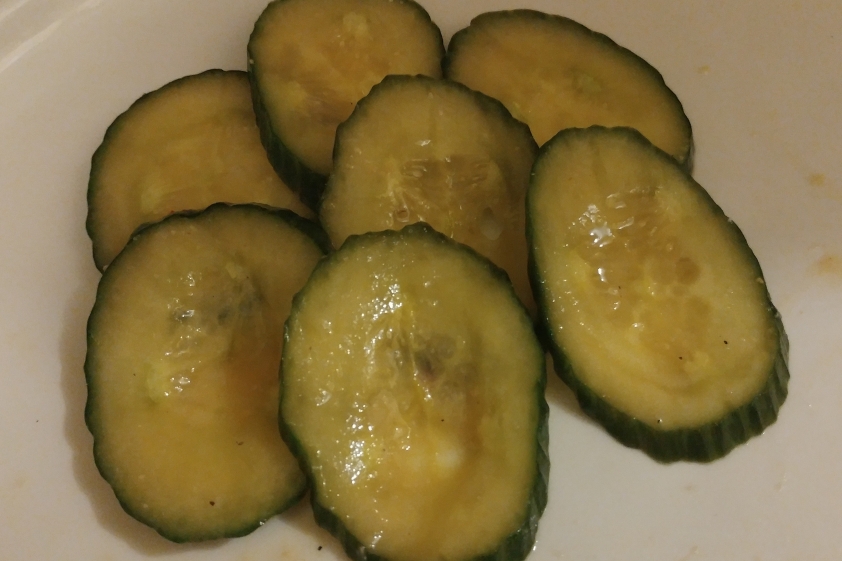 This was a very rewarding experiment and I will be doing it in the future with some variances. I will certainly share these updated experiments. In the meantime, there are more vegetables to experiment on in a multitude of ways.