Shiozuke means, literally, salt pickle. This, the simplest of Japanese pickles, is a mainstay of the pickle platter. The process can be achieved with the most basic of kitchen items: salt, bowl, time. The length of time varies according to your needs, with the shortest amount of time not depending on any fermentation whatsoever. One can simply slice cucumbers, grate ginger, salt the two in a bowl, massage them and let them sit until the salt has osmosed the water right out. In this case, the pickles are squeezed out and the resulting vegetables are laid out for eating. This is too simple for my taste and without the added je-ne-sais-quoi of a fermented product.

In my research on tsukemono pickles, I kept seeing these magical pickle pressing devices. Although simple, I’d never seen such a thing in any Western kitchen supply store. A plastic container with a specialized lid, basically. The lid includes a sort of piston that fits within the container and can be screwed down from the lid-top. I did my requisite amount of internet research and purchased a 3-liter rounded pickle press (the one you see below). 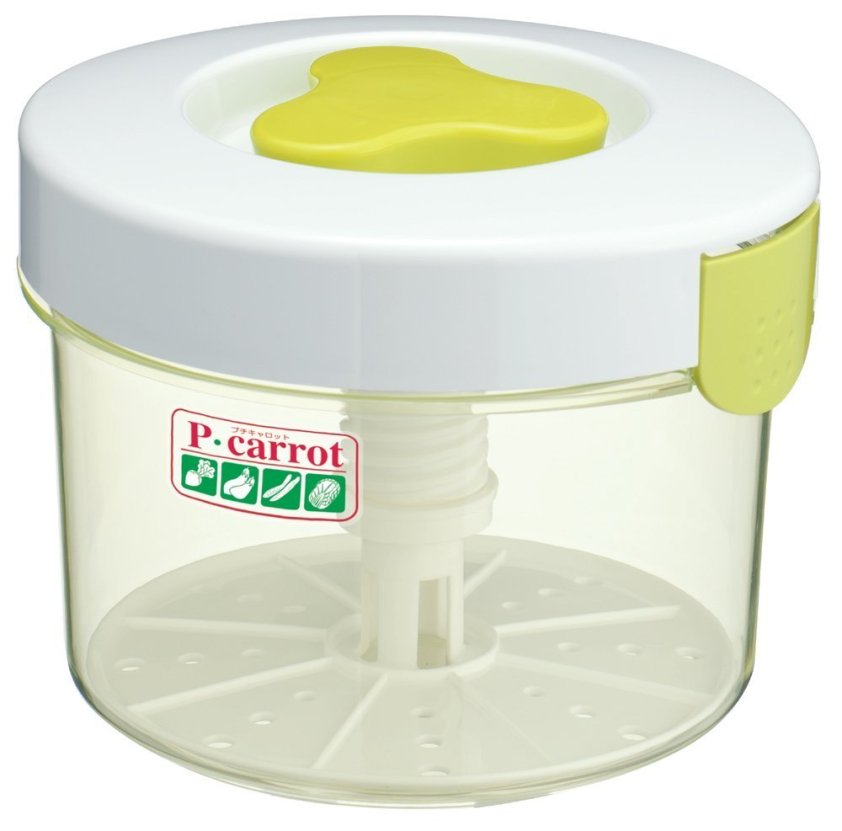 For less than $20, this could join your kitchen

Now having the appropriate tool to turn my cucumbers into pickles, I started the process. Using a mandoline, I sliced a large English cucumber at a slight angle. English cucumbers, like Japanese cucumbers, have thinner skin and fewer seeds than your usual cucumber. They are generally the better choice for this process. To flavor the pickles, I chose kombu and chili flakes. The last ingredient is salt, obviously. I mixed them all together in our new favorite kitchen device and clamped the lid on. Here are the particulars:

I screwed down the lid as much as I could, set it in my cupboard, and let it go about its business. Over the next 12 or so hours, the water leeched from the cucumber began to fill and cover the vegetables. In this process, the water that comes out carries off the lactobacilli and creates the brine for the anaerobic pickling process.

The cucumbers are now swimming with the kombu and chili flakes

Now that the self-made brine had revealed itself, it was time for further waiting. My experience with traditional Western brine pickles, such as sauerkraut, made me assume that more time was needed for this process, especially absent a starter to push the process into overdrive. I let the cucumbers sit in this state, in the room temp cupboard, for two days total.

What came forth was not exactly what I was expecting. The kombu, an inveterate carrier of valuable umami, had imparted a funky sea-like quality to the scent that humidly wafted from the pickle press. There was a little kahm yeast that had formed on top. This is not a problem and is a completely normal aerobic reaction to the brine. I removed it from the top by pouring some of it off. Taking some slices out, I noticed they were slightly shriveled in aspect but complete in form, with pale green flesh and mottled and chalky skin, pebbled with chili flakes. There was a slightly slimy feel to them as well.

The flavor was underwhelming but not terrible. Blast of uncomplex umami and salinity, not very layered or interesting. These could easily go with a salad, part of a crowd of flavors, but not so much on their own as a snack.

I had my wife, Anne, taste this and her take was this: “Tastes like what I imagine the reptile house at the zoo tasting like.”

My takeaway from this: sometimes you need to trust that everything needn’t be a long fermented item. I’d definitely let these ferment in the refrigerator for my next attempt, which would allow the flavors to develop more slowly and with the proper complexity. Hopefully, this would also ensure that the kombu didn’t turn the whole affair into a mind trip to the zoo.