Recently, we’ve been getting our produce box from Imperfect (which I most certainly would recommend). The produce can be ugly, which is the point. Why we should care about scarring or odd sizing on an item meant to be cut and cooked is beyond me. We’ve gotten a large amount of slightly ugly vegetables. I noticed on a couple of occasions, the radishes were a little hard and not in peak state for devouring raw with salt over the sink (the best things are done with passionate haste). While a little sad, this is not something that cannot be overcome by some thoughtful processing.

I cleaned the radishes, removed the ends, and sliced them thinly. Into the trusty pickle press, they went. If I had carrots, I would have added those as well (I have before). I happened to have a yellow bell pepper, which found itself sliced up and piled in there with the radishes. I was making Mexican food at this moment, so I had items of that persuasion close at hand. Sliced jalapenos, red onion, dried aleppo pepper, cumin seed, lime zest, smashed garlic cloves – all went in. Topping it off, I added coriander seed, just a few, to add to that bright layer where the lime zest lives. 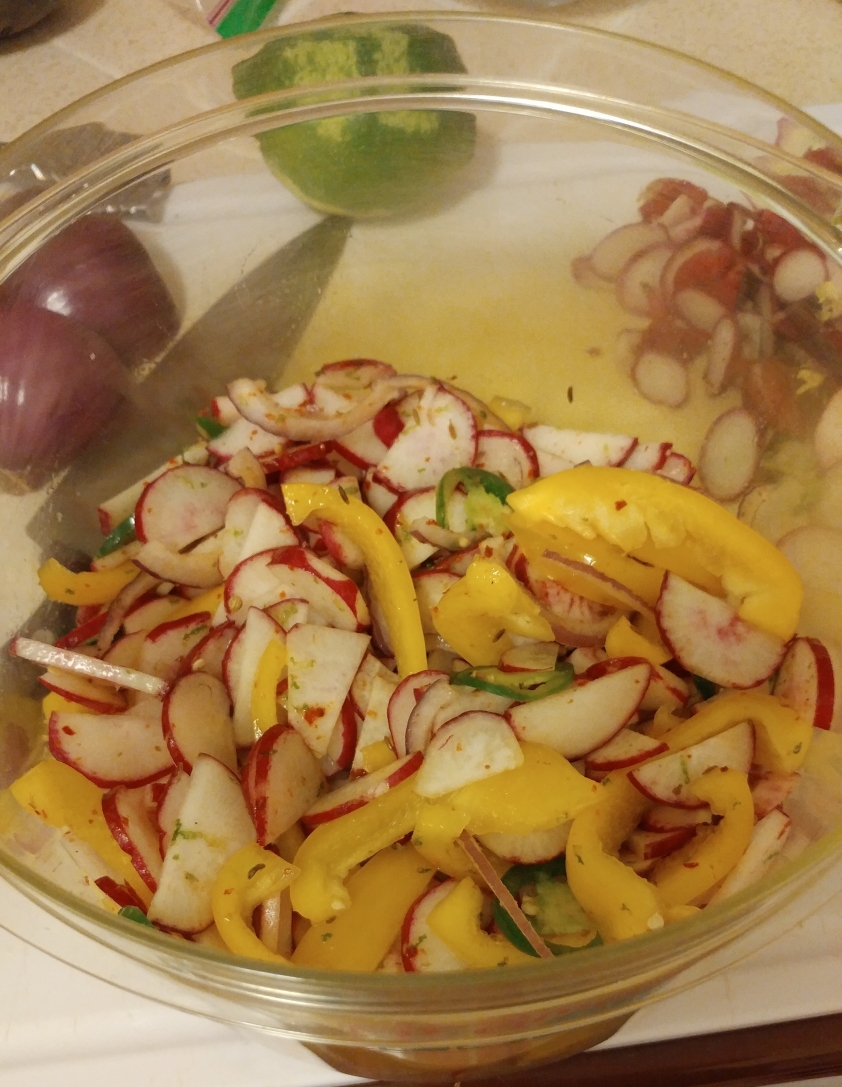 This is the part where you add a somewhat liberal sprinkling of sea salt and mash it all together with your hands. Once you are certain that all contents are touching sodium, pat it down flat and on goes the lid. Screw it down and set it somewhere to osmose. Eventually, the vegetables will have given out their internal water and they will be awash in the sea of their own brine. I noticed that the brine didn’t quite cover the vegetables, at which point I added some apple cider or balsamic vinegar. I think this is a good step regardless as it adds the requisite acidity that really makes these pickles shine. Just a few good splashes and throw the whole affair into the refrigerator.

The next day, or days later, you will open your fridge to pickles you made (as I did), pull them out (as I did), and consume them on their own or in a burrito or in a salad or on a sandwich (all of which I did). You will love it. I did. The result was a newly delightful radish embedded with saltiness, spiciness, brightness, and acidity. The coriander and lime zest lent the flavor a loftiness, while the cumin and garlic grounded it. To top it off, the slight spiciness from the jalapenos was exquisite. These pickles can play all bases. Further, they are so damned easy. I am certain this can be accomplished with a variety of unfortunately hardened veggies. Just try it out!